Please introduce yourself, and tell us about your background.

My name is J. Allen Hill. I am a first time novelist with a PhD in Living – a little conceit of mine, as much like my secretly adopted mentor, John Steinbeck, I have never completed a degree program. A Midwesterner by birth, an East Coaster by choice, writing has been both a source of income and a lifetime’s pleasure. If experience has anything to do with putting words on paper, I’ve probably done it or taken a class in it: newsletters, white papers, administrative, technical and financial reports, government proposals, user guides and training plans, software test plans, meeting minutes – facts, protocols, standards. My only relief from this routine was working in the theater and trying my hand at drama. These days I can indulge full-time in short stories, poetry, and novels.

When I sit down to write, I draw on my pool of distilled experience: everything from people I have known to places I have been to achievements and 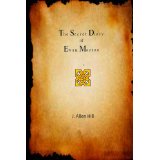 failures, pleasures and pain. The memory bank can be a strange place to visit, but so much of what I dredge up from there often lands on the page – a fit of laughter, a painful affair, the scent of a long desiccated sprig of lavender plucked from a childhood garden, all woven together with fragments of truth and wild sprints of imagination. And that is why I write. It is such an adventure.

When did you begin writing?

Around the age of ten. I wrote a play about a band of gypsies gallivanting around a forest – kind of a cross between Carmen and Robin Hood.

Do you write every day, and are novels the only things you write?

One way or another, I do write every day, much of the initial drafting taking place in my head, getting acquainted with prospective characters and working out plot problems.

I prefer writing novels but am also working (slowly) on a novel constructed of short stories – somewhat in the style of Olive Kittredge. Sadly, I do not put pen to paper every day. It’s a form of writer’s block, I suppose, but I write chronologically, and am completely unable to begin a piece until I have worked out the beginning in my mind. I have, however, usually written the main character’s back stories and know the end of the novel before I begin.

I know you have just released a new novel. Please tell my readers about it, and what your inspiration to write it was.

The Secret Diary of Ewan Macrae was originally inspired by my reading of Born Fighting:

How the Scotch-Irish Shaped America, by Virginia Senator James Webb, as well as my love of the story of the founding of America, and my own trip to Scotland where I unexpectedly discovered that my family name, Allen, has Scottish roots. Wanting to tell the story of an early Scottish immigrant and how he might have influenced future history, I decided to tell two stories of one family spanning two centuries.

The novel, set in 1946, is the story of two very different people. Margaret is an abused small town North Carolina mountain girl. Phil is a Manhattan writer running from the law. Both are launched on journeys of self discovery. Together they search for the answers to a mystery, the solution probably buried in the past. Along the way they uncover a conspiracy, overcome conflict and fall in love. A source of strength and inspiration for them both is the 200-year-old diary written by Margaret’s Scottish ancestor who fled to America in 1746. The accounts, spanning two centuries have amazing parallels.

I chose to construct the novel using these particular dates that I find quite significant in the history of our country: 1946, when the United States, victorious in World War II, is poised to take over the leadership of the world. And 1746, when waves of immigrants were arriving in America just as it is poised to launch the war from which it will emerge as that fledgling power.

What is your most rewarding writing experience?

There are many, but probably the best is the satisfaction in completion of a project lovingly crafted for (in my case) well over 5 years.

Do you belong to any writing groups, or critique groups?

I am a past member of the Playwrights Forum, Washington, DC, a member of the Writers Center in Bethesda, Maryland, the Virginia Writers Club and its chapter, Riverside Writers. I also participate in Riverside critique sessions and a local novel-writing group named SCADR.

Are you working on any new project?

Yes. Several years ago I discovered the tomb of an unknown Revolutionary War soldier in a churchyard in historic Old Town, Alexandria, Virginia. Apparently, he was first discovered buried in an “ammunition box” wearing a “Patriot uniform with Kentucky buttons.” After polling every organization involved in his dis- and re-interment for information as to who he might have been and I found, while there is much speculation, it appears he really is unknown. I decided to write a story of what his life might have been and how in the world he ended up in that box. The Unknown: An American Odyssey is due out in 2014.

It has been said that writing is a lonely occupation. However, it is also a collaborative life and for that I thank all of my cohorts. So many have given generously of their knowledge, skills, and support to this project – it could not have happened without them.

As The Secret Diary was released just days ago, my website is in the design stages. The book can be found on Amazon at the link below: