Go Inside The FBI

Today I’m visiting with William Larsh who has a new book out, The FBI, They Eat Their Young.

Hi, Bill, I’ve read your book and found it interesting and intriguing since it affords readers a glimpse into the FBI most have never seen. Please give my readers a thumbnail sketch of yourself.

Sure, John, and thanks for hosting me on your blog. I was born and raised in Perry Hall, Maryland, graduated from Towson State University, Towson, Maryland, and began 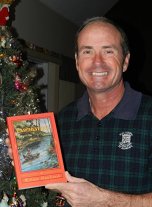 working for the FBI in 1984.  In 1987, I was appointed as a Special Agent and was assigned to several different cities throughout my career.  I retired as a Supervisory Special Agent in 2012.  I currently live in Hanover, Pennsylvania.

How did your writing journey begin?

I honed my writing skills during my long career in the FBI.  I told countless stories of my FBI experiences to other FBI agents, friends, and family, throughout my career.  Nearly everyone seemed interested and amused by more stories.  Many FBI agents said to me, “Bill, you should write a book.  The public would never believe it.”  Following retirement, I wrote the book!

Tell us a bit about your new book, The FBI, They Eat Their Young. 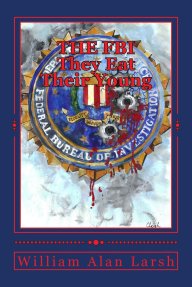 This book is an honest and detailed memoir of an agent’s career, providing the reader with the unique and amusing story of one agent’s journey from his first day of work until his retirement.  My story, however, exposes a dark side of FBI management in a callous bureaucracy, illustrating their pettiness, vindictiveness, massive egos, and retaliatory nature.

Have you written any other books?

I published my first book in December 2016, a novel entitled “L’Archevêque” based on the true story of my ancestor, Paul L’Archevêque, a French fur trader who traded with the Shawnee Indians in the Ohio Valley in the 1700s.

What are your passions, hobbies, family?

Golfing has always been my passion.  I also enjoy traveling, working out, bicycling, watching old movies, and listening to my favorite music.  My favorite travel destination is the Highlands of Scotland, where my grandmother, Elizabeth Chisholm Larsh, was born.  My family and I enjoy visiting our Chisholm cousins in Scotland, hiking the mountains in the Highlands, and playing golf on Scottish Links courses.  I have been married for over 33 years to my wife, Cindy.  We have two grown children, Ethan, age 27, and Mary, age 26.  We also enjoy visiting our extended families that live mainly in Maryland and Pennsylvania.

Besides writing two books, I have been able to enjoy all my interests full-time.  I have played approximately 1,500 rounds of golf since retiring, many with my children and wife.  I have traveled to see my Chisholm cousins in Scotland four times (2013, 2014, 2015, 2016) for as long as 30 days.

Any new books on the horizon?

My nephew (by marriage) has requested that I write his biography.  He is a full-blooded native Indian from Canada from the Métis Nation.  Following his birth in 1973, Canadian social workers forcibly took him away from his mother.  He has recently learned of the identity of his mother and other relatives in Canada and is participating in a class-action lawsuit filed against the Canadian government for their unconscionable policy of separating indigenous children from their families and then putting them up for adoption to white families.

Bill, thanks for visiting my blog today. I’m sure readers will find your book as fascinating as I did. Best of luck on your future endeavors. Visit Bill’s Amazon author page for more information.

A visit with author John Ouellet

Today my guest is John Ouellet, a former FBI colleague in the Detroit Division. John, I know you recently retired and just had your first novel published. That’s exciting news I’ll want my readers to learn about. Thanks for agreeing to be a guest on my blog.

Please introduce yourself and tell the readers a little bit about yourself:  when you began writing, your background, where you live, etc.

My name is John Ouellet. I grew up north of Boston and graduated from Northeastern University with a criminal justice degree. As an ROTC grad, I received a commission in the Army, first as an MP, then an Infantry Officer. I spent nine years there before a 23-year career as a special agent with the FBI, the entire career in Detroit. So I guess that would lead you to believe crime/mystery would be my genre.  Or maybe military history. Actually, my first novel was a love story, A FINE AND PRIVATE PLACE. That was in the early 1990’s. It’s unpublished but I think it has some of my best writing

Has your law enforcement background influenced your writing?

Yes, very much so. Besides knowing how to do a decent procedural, it gave me a character foundation whereby I could feel the motivations, hear the speech pattern, and put together some credible dialogue in scenes that don’t seem contrived. (In my love story I had to reach some. I mean, I love my wife but we would make a pitiful novel). In crime writing, a cop/investigator comes up with scenes, characters, dialogue, and motives effortlessly. I guess the trick for us as writers is to get out of our own skin and completely into our characters.

I have several completed crime novels in my thumb drive waiting to breathe air. I particularly love writing the Caper which Lawrence Block (I believe it was Block) called the “How catch ‘em” as opposed to the “who dunnit.” The sub-genre is best done by the late Elmore Leonard. Here the character runs the show. What he or she does is secondary to how they do it.

What inspired you to begin writing, and do you write every day?

I’ve always loved to write, and I think I know why. As a kid I played cowboy and Army. I didn’t just play; I acted out my own screenplays. I had others act them out with me. If I were alone, heck, I’d take on all the parts. Very (melo) dramatic. I was the only six-year old in the neighborhood to have a love scene played out just before the hero bought it.

I was voted my high school class writer but it was a fluke. I wrote a horror short story that was published in the school journal my senior year. Other than the perv who scratched and scribbled in the boy’s bathroom, I was the only guy anyone could think of, and I didn’t beat the perv by much.

I’d love to write everyday but it doesn’t happen. But, John, you know how that works – when you’re a writer, you’re always writing, wherever you are, even in your sleep.

I know you have a new novel that just came out. Please tell my readers about it.

Yes, the plug. Thanks, John. THE CAPTIVE DOVE, published in November 2013 by All Things That Matter Press. It came to me from a FBI colleague who had read the short stories I had published in St Anthony Messenger (I mention this in the acknowledgments).

Joe, his brother-in-law is of Palestinian descent. In 1964 when he’s six and his sister is 14, they accompany their grandfather to the village Dayr Ghasana in the West Bank from their home in South Chicago. His sister and grandfather soon leave, but Joe stays on until June 8, 1967, and is rescued by Israeli soldiers after being caught in Ramallah at the start of the Six-Day War. Joe is with his mentally handicapped cousin who is killed on the second day. It takes Joe three days to find his way back to the village where an Israeli captain takes him through hostile fire and bombings to get him to the Tel Aviv airport. True story. I added fictional characters and accounts to create a more compelling one.

What intrigued me most about Joe’s story was the theme of war from children’s eyes where Joe witnesses heroes and villains on all sides. It is in first person point of view, and though it’s a flashback (where Joe can reflect as an adult), the perspectives of this new world all come from young Joe.

Tell us about your publishing experience.

I take it you’re referring to the act of getting published. As I mentioned, I have about ten complete and three incomplete novels. I send them out and get some feedback, but mostly boilerplate rejections. And by the way, I don’t count the rejections so that someday, someone will say, “Hey, you know that guy was rejected 74 times before he was published.” That’s like Miguel Cabrera counting the number of times he didn’t hit a home run. I count only the acceptances. One.

Back in the early 90’s, I was mailing out the query, synopsis, and three chapters via US Postal and FedEx. That cost bucks. Even though email submissions are cheaper, you still can’t shotgun them out.

For THE CAPTIVE DOVE, I knew without a track record I wasn’t going to cut it with a major literary agent or Press. Been there, done that, and frankly, John, I wasn’t about to waste my time and efforts. So I went to the small, independent Presses. When I got a name, I ran them through the Predators and Editors website. Then I just Googled them for any good/bad reviews. All Things That Matter Press came off looking promising so I took the plunge.

As you know, small presses have no budget for marketing so I’m still a babe in this area (glad you didn’t ask about my marketing experience ‘cause this would have been a very short block).

Also, you won’t find a copy editor to dot your “i’s” so don’t rush through the galley as I did the first time around. It came out on Amazon, I bought 15 copies, advertised it on Facebook, then slunk back to tell folks to hold off on buying the “Oops” copy until I got it close enough for government work.

What is your most rewarding writing experience?

Getting published (somebody believes in it).

Do you belong to any writing groups, or critique groups?

I just joined the Public Safety Writer’s Association. Another plug, I started a group on GoodReads in the Mystery and Thriller section “Crimewriter how to.”  It’s advertised for crime writer’s (or novelists who are creating such scenes) who don’t want to rely on LAW and ORDER for their procedural and tactical law enforcement info.  I invite readers of this blog to join as expert advisors, as well those writers who could use this as a resource.

Are you working on a new project?

Always, John.  I do have a mystery series concept with the first book half done.

Thanks for reading this and THE CAPTIVE DOVE. John, I’m not proud. I’m not going to say writing is its own reward. The reward is the reader. Without them, we’re on the range shooting blanks

The novel can be found at:

Thanks for sharing your story with all of us, John. I wish you much success in your journey as a writer. I look forward to seeing you in July at the Public Safety Writers Association conference in Las Vegas.

Reporting and consulting on the publishing industry