The old woman locked the door to her apartment and turned toward the stairway. Elizabeth held the leash tightly with one hand and the railing with the other as she began her journey to the first floor. “C’mon, Charlie, let’s go to the butcher shop before the snow gets too deep. Ole Ralph promised to save a big ham bone for me.” 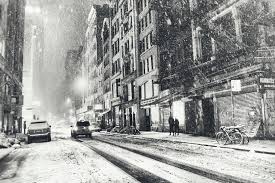 Since her husband died four years ago, Charlie had been her only companion. A mixed mutt, the two had become inseparable from the moment Elizabeth had seen the dog roaming the streets looking for food. Not that she had much food herself. Her social security barely paid the rent and utilities. The two had been sharing one meal a day for the past year.

She reached the vestibule and stopped to pull on her gloves and put up her collar. She looked out through the glass door. “My oh my, the snow is blowin’ like crazy.” She hesitated. “Well, I guess it’s not going to let up any time soon. If we want to have soup for Christmas tomorrow we’d better just go.”

She opened the door and stepped into a swirling wind that made the snow dance like a snow globe when it’s turned upside down. Once on the sidewalk, she slung her purse over her shoulder, put her head down, and then headed toward the butcher shop two blocks away. A few buildings into their journey, the dog signaled he needed a break. “Okay, boy.” She steered him to the curb where he quickly relieved himself and then they continued on.

As she moved back onto the sidewalk, she felt a strong tug on her purse. “Give it up, lady!” a tall figure shouted at her. She dropped the leash and held onto her purse with both hands. “Let go before I have to hurt you!” The man shoved her hard and Elizabeth fell to the ground struggling to keep her purse.

The man kicked her in the stomach. That ended Elizabeth’s attempt to hold on. As he bent down to remove the strap from her shoulder, Charlie sunk his teeth into the back of the thug’s leg.

“Damn dog . . . let go . . . ow . . . The robber spun around several times hoping to throw the dog off, but Charlie had a tenacious grip and hung on tightly. The man let go of the purse and reached around to grab the dog. He pulled at the dog as hard as he could, breaking Charlie’s grip on his leg. While still holding onto it, he flung the dog hard against the side of the building. Charlie let out a loud yelp and then lay still on the ground in a pile of snow.

“Charlie!” Elizabeth crawled over to her precious pet. “Oh, Charlie, are you okay?” She saw the dog’s stomach rise and fall. He’s alive. Charlie looked at her but was unable to move.

Thomas Wickham hated driving in the snow. Even though he was from the Midwest and had been through his share of harsh winters, he never felt comfortable driving this time of year. The east coast sometimes seemed worse, with its Nor’easters that crashed into the cities crushing them like an iron fist.

He slowed to stop for the red light and caught movement from the corner of his eye. The snow was relentless and his wipers fought a losing battle to clear the windshield. Thomas squinted to see . . . what . . . is that . . . no! He saw an old woman being pushed to the ground and a man trying to steal her purse.

Thomas threw his car in park and leaped out. “Get away from her! Leave her alone!” He ran toward the figure lying in the snow, as the man ran away with the woman’s purse. Leaning over her, he saw the dog in the snow bank. “Ma’am, are you okay?”

“It’s Charlie, he’s hurt,” she sobbed, tears streaking her weather-worn cheeks. “He saved me . . . he went after the guy who robbed me, but now he’s hurt.” Elizabeth laid her head on her friend’s body. “Don’t leave me, Charlie, I don’t want to be alone again.”

Thomas Wickham was a man of action. He always knew what to do in every situation. As much as he wanted to comfort the woman, one look at the dog told him it was crucial they get him to a vet. “Can you get up? My car’s right over there, let’s take Charlie to the vet.”

She sat up slowly. “My ribs are sore, but I just live down the block. If you could help get us home.”

“Nonsense. Your dog is hurt, he needs medical attention.”

Elizabeth shook her head and wiped her tears with her coat sleeve. “I don’t have any money for a vet. If you can carry Charlie to my apartment, I can nurse him there.”

“You don’t need money, c’mon, let’s get going.” Several minutes later they were in the car headed toward the west side of town. They parked in the lot of a glitzy building.

The woman looked around. “Mister, I, I, can’t afford anything around here. Please take me home.”

Without a word, Thomas scooped the dog up and in minutes they were in a veterinarian’s office where Charlie began receiving emergency care. Thomas and Elizabeth chatted while the vet examined and treated the dog. Thirty minutes later he came out and spoke to Elizabeth. “He has a concussion, and it looks like he lost a tooth somehow, but in a couple of weeks he’ll be just fine. I’d like to keep him overnight as a precaution.”

Thomas took the woman’s hand in his. “I’ll take care of everything, Elizabeth. In fact, I’ll make sure you’re both taken care of.”

“Have you ever shopped at Wickham Food Stores?”

The man laughed. “You won’t have to worry about that. I own the entire chain of Wickham stores up and down the east coast. I’ll make sure you shop for free at my stores for the rest of your life.”

“Yes, dead serious. And I’m going to pay your rent and utilities as well.”

The old woman’s eyes welled with tears. “Thank you, Mr. Wickham. But why are doing this?”

“Because I can, and because it’s the right thing to do. You and Charlie came into my life at a time when I had begun to forget what’s really important. I was on my way to look at a property to purchase for another store when I saw what was happening to you. I’m convinced God brought us together today to show me that I need to give back and be grateful for what He’s given me. Let’s just say Christmas for the Wickham family is going to be quite different from now on. We’re going to be giving much more than we’re taking.”

Elizabeth wrapped her arms around Thomas. “Thank you so much.”

“You’re welcome. Merry Christmas to you and Charlie.”