The Sniper Mind (a book review)

Being a former sniper, I was immediately attracted by the book’s title. I was under the impression that this book was an in depth look at what makes snipers tick. It is, however, once I began reading The Sniper Mind by David Amerland.I realized it was about much more than snipers. Although the author examines how and why snipers are so successful at their craft, he then uses their techniques and tactics to illustrate how anyone can be successful in life by using the same techniques snipers use. 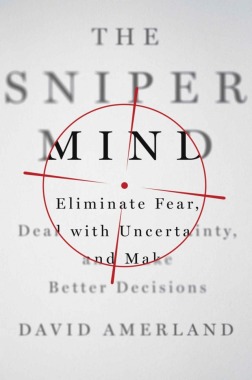 neuroscientific research, and by conducting interviews with more than a hundred current and former snipers. Each chapter contains a story about a sniper which serves as a segway to a cogent point regarding improving one’s own performance in life and/or business. He then asserts that the snipers’ elite performances that allow them to excel under extreme conditions can be used by anyone to improve their own skills in business, communications, relationships, and their personal lives.

There are many remarkable stories about the feats of snipers throughout the book, how they manage to complete their mission despite overwhelming odds such as long hours, hostile conditions, and lack of sleep and food. The reason they’re successful is they’ve trained their minds. Amerland contends the mind has an ability to sharpen its focus over time through training. He demonstrates, via the minds of snipers, how ordinary people can do extraordinary things, exhibit self-control, and make complex difficult decisions under the worst conditions imaginable. He then asserts that these same tactics can be utilized in personal lives and the business world.

In a vivid descriptions of the sniper’s ability to control his mind and emotions, Amerland says, “The strength and power of a fully developed sniper mind comes from the ability to harness and control feelings and emotions constructively, creating an empowering, motivational platform from what most people would be demoralized and demotivated by. It’s no mean feat. It means being able to grope into the empty space from which despair should normally spring and manage to pull out hope.”

If you’ve ever competed in sports, or been tasked with delivering an important address or presentation, you know the anxiety that accompanies such a task. The author has a section in The Sniper Mind that describes, “The Navy Seal’s List Of Mental Tricks.” SEALS endure the most rigorous of all military training and tests. They are stretched to their individual limits and beyond—sleep deprivation, hunger fear, injuries, etc. Many don’t make it, but the ones who succeed do so by using four simple steps:

·        Set Goals. As in life and the business world, everyone sets goals. However, the SEALS break down their goals into micro goals, short-term goals, and long-term goals. Thus, nothing becomes unobtainable, and they simply take things one step at a time.

·         Visualize The Outcome. Just as an athlete sees himself scoring the winning touchdown or crossing a finish line first, so also do the SEALS train themselves to “see” the outcome they are aiming for. Amerland tells us the SEALS prime their brains for success, which in turn is reflected in the attitude with which they approach each task.

·         Cheer Yourself On. This tactic is particularly useful during their infamous Hell Week. They constantly give themselves pep talks and rationalize that many have endured the same rigors before them and succeeded.

·         Self-Control. SEALS train themselves to control primitive instincts such as anger and fear. Once they are able to do that, they become more confident in their ability to adapt and overcome.

The author concludes that these four mental tricks are adaptable to the business world as well. Furthermore, “Resisting stress, developing a strong will and mental resilience, and maintaining fortitude against adversity are desirable characteristic for any person, not just a warrior.”

The Sniper Mind is a great read for anyone, whether they’re military, police, fire, or civilian. The book is set up so that each chapter describes how to develop or improve a specific skill set and explains the science behind it. At the end of each chapter is a summary of what was contained therein. The book is actually a handbook on how to become exceptional in whatever path you choose by understanding how your brain works.

Award-winning author and freelance writer. Published ten books in addition to more thant 200 articles, short stories, and poetry. Writing professionally since retiring from the FBI in 2004.

2 thoughts on “The Sniper Mind (a book review)”

Reporting and consulting on the publishing industry